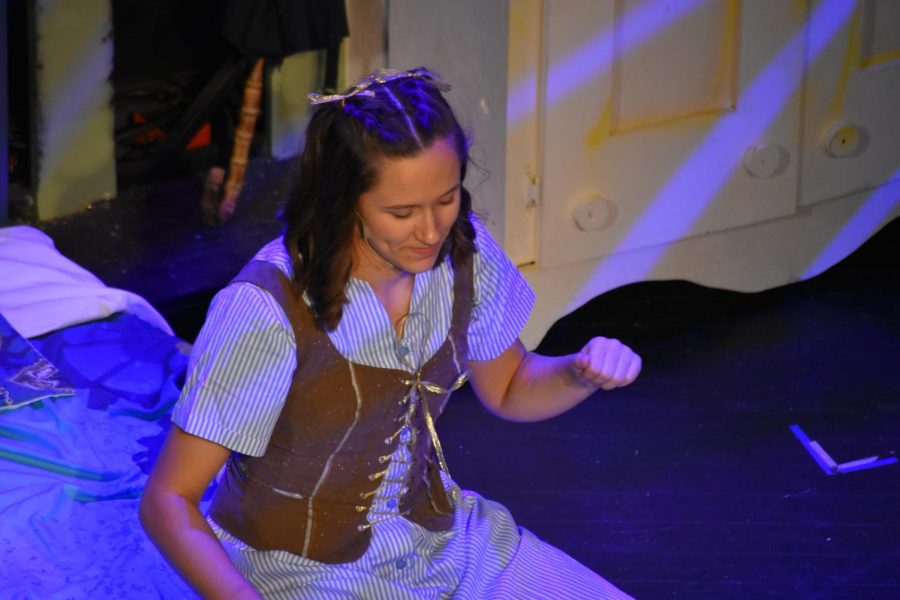 Howard takes time to have some fun on stage by dancing to Tik Tok dances between scenes.

Megan Hayes and Mihika Rao
The glorious tale of Peter Pan and his many adventures was showcased over the first two weekends in November by Rock Ridge Performing Arts. This particular production differed from the others RRPA has performed; normally, the production would be a musical, but with “Peter Pan,” it was a play, which was an interesting change for the company. RRPA always performs wonderfully, but this was the best production in my opinion thus far. The costumes, designed by junior Cleo Barr, were created very well, with numerous details to depict the essence of the characters in Peter Pan. The set gets better and better every year; the fast changes in scenery and the unique artistic designs draw in the audience every minute. The set this year included multiple interesting pieces, such as a massive crew ship, which was very authentic and attracted the audience; this was all coordinated by junior Jack Rood, the main technical designer.

Senior Anjali Mehta, the director of the special effects, changed up the way RRPA usually handles its productions. The special effects of the musicals are always outstanding, but this play took them to a whole other level.  One of the unique additions to the special effects was the portrayal of Tinker Bell. The actress playing Tinker Bell would stand on the side of the stage, while a green light would shine on the scene to represent Tinker Bell. The actress, freshman Julia Freeman, would speak and do the expressions of the green light; this was very clever and creative.

Another fantastic aspect of the play was that the actors would fly with the help of the crew. This was reminiscent of “Mary Poppins,” a past production of the company. The company also introduced fire into the play, which amazed the audience and drew them into the events of the production. The fire brought the drama off stage once, stopping the show due to technical difficulties, but when the fire was resolved, the actors came back into the play as if nothing had happened, successfully redirecting everyone’s attention back to the play.

The expressions and overall acting of the actors was beyond phenomenal; from their movement and voice to the energized dances, the actors kept the audience engaged the entire way. It was impressive to see how the actors, such as the leads seniors Farley McDaniel and Katie Howard, could develop an accent so quickly and make it believable to the audience. During intermission, the actors remain in character, and the pirates and others came and interacted with the audience. During the play, the actors invited a few little kids onto the stage to be a part of the play for a couple minutes, which made the audience feel involved and welcomed. “Peter Pan” in the end was very appealing for the audience and overall was a fantastic show.