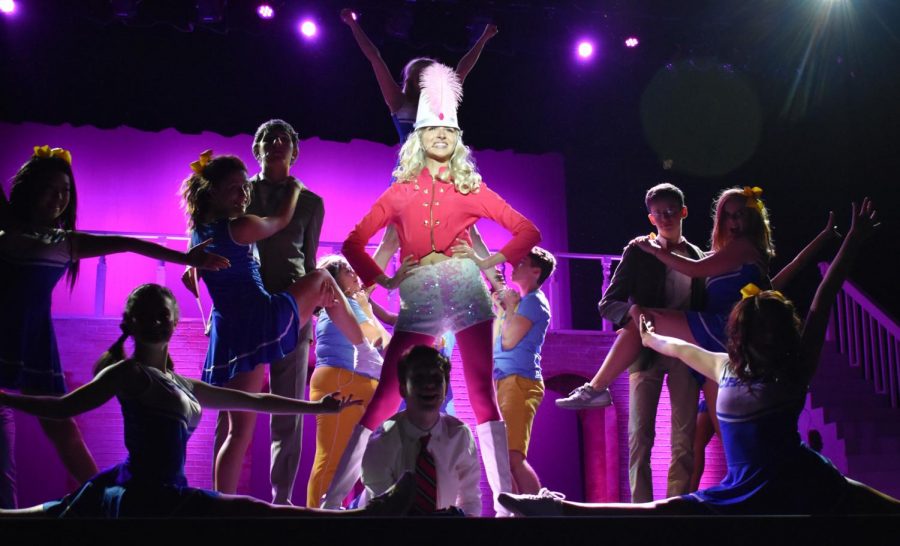 “Legally Blonde,” the latest Rock Ridge Performing Arts production, hit the stage on  Dec. 5, 6, and 7. The winter play was put on by students in the musical theater class. The musical follows the fabulous and determined Elle Woods, played by junior Hannah Gates, in her mission to make the love of her life love her again after a recent breakup. In the name of love, Elle applies and attends Harvard Law School, realizing her passion for the law, as well as uncovering her unexpected affection to her friend Emmett Forest.

“Legally Blonde” was completely student directed. Senior Nico Zavala was the vocal director, senior Ryan Nguyen the director, senior Akshatha Srivasta the technical director, and junior Elle Ouimet the choreographer. “It made everyone very proud because the students all did this together and made it super fun,” Ellie Schubert, a sophomore who played Paulette, said. The student directors and actors handled the stress over the production “Peter Pan” that took place only a short couple of weeks before “Legally Blonde.” “Our director Mr. CJ kept saying … remember, this isn’t a race, it’s a marathon. You’ve still got a ways to go, so just keep pushing through,” Schubert said. The students’ perseverance resulted in two successful performances, even with all of the pressure.

Lead actress junior Hannah Gates only started acting a bit before high school. Gates’ dad signed her up for a theater summer camp, Gates said. She wasn’t too sure about it at first, but then she ended up loving it. This was her first time playing a lead for any RRHS performance.

“I prepared a song that was a little bit out of my comfort range, but unlike past auditions, I didn’t hold anything back,” Gates said during auditions. Gates has learned a lot from her character Elle Woods. “She’s very energetic and always tries to stay positive. I’ve learned a lot from that, and I have been a little bit more optimistic in my daily life because of her,” Gates said.

Like the name of the play, Gates’ favorite song that she performed was “Legally Blonde.” Although the song was challenging to sing, it was unlike any of the others in the show because it was so deep and powerful, she said. While Gates worked through stress to prepare, she nailed the performance, making it all worth it in the end.

Rock Ridge Performing Arts is serious about their productions, and not only do they focus on the art of acting, but also on the lights, props, and dancing. “Legally Blonde” is more than “What’s right in front of you!” as Gates sings in “What You Want,” with all the particular details the students need to remember to make the production the best it can be. Naturally, “Legally Blonde” was nothing short of spectacular, showcasing the skills and talents of the theater students.