Road To The Presidency 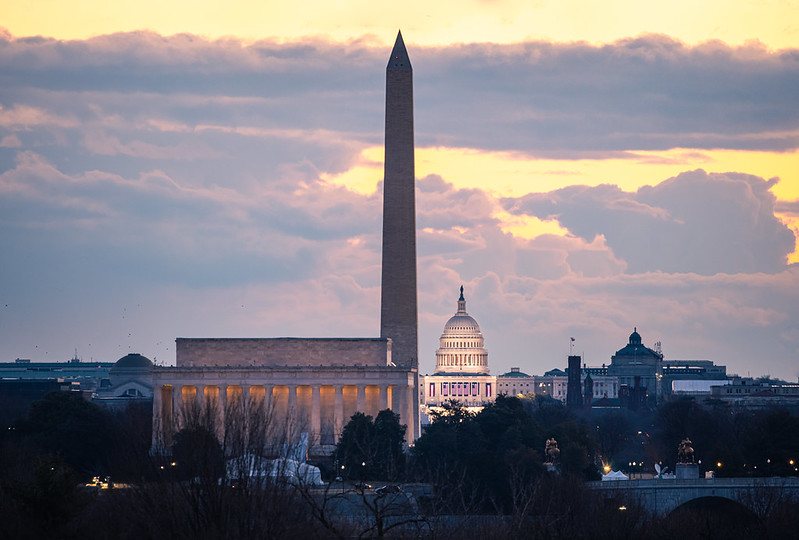 The U.S. Capitol on the morning of President Biden's Inauguration.

Updates on VA Races, Virginia Question 1, Virginia Question 2
On Jan. 3, Democrat Mark Warner was sworn in as U.S. Senator of Virginia after winning the election against Republican Daniel Gade. Warner won the race with 56% of the vote, collecting 2,466,500 votes and Gade collecting 1,934,199 votes. “I’m incredibly proud and grateful to the people of the Commonwealth for sending me back to work in the Senate,” Warner said after his victory.

In the U.S. House District 10, Democrat Jennifer Wexton won her reelection race against Republican Aliscia Andrews, 56.6% to 43.4%. Since her win, Wexton has supported the second impeachment of President Donald Trump for the ‘incitement of insurrection”. “The president has been encouraging these domestic terrorists since before the election. He could have stopped them at any moment, but instead, he whipped them into a frenzy and sicced them on the Capitol. The Cabinet must remove him today, or the House must impeach,” Wexton tweeted on Jan. 6.

Question 1, the Redistricting Commission Amendment, which would allow for redistricting in Virginia through a 16-person panel, split between eight legislators and eight citizens, was approved through a statewide ballot, 65.7% to 34.3%. This means that the process of redistricting, redrawing boundaries of legislative districts in order to account for population changes, will fall to the new commission instead of the General Assembly. The commission’s deadline to hold their first meeting is Feb. 1.

Senate Flips Blue At Georgia Runoffs
In the November 2020 election, neither of Georgia’s Senate candidates received more than 50% of the vote, resulting in the top two candidates with the most votes going on to a runoff per Georgia law.

Georgia was in a special election because not only one but both Senate seats were up for election as Sen. David Perdue, R-Ga., finished his six-year term, and Sen. Kelly Loeffler, R-Ga., was appointed to her seat by Georgia Gov. Brian Kemp, R-Ga., when her predecessor retired last year. Perdue ran against Democrat Jon Ossoff, and Loeffler ran against Democrat Raphael Warnock on Jan. 5.

In the first race, Georgia voters elected Ossoff to the seat. “Everybody who cast your ballot, everybody who put your faith and confidence in our democracy’s capacity to deliver the representation that we deserve — whether you were for me, or against me — I’ll be for you in the U.S. Senate,” Ossoff said according to NPR. “I will serve all the people of the state.”

The second race was between Republican Sen. Kelly Loeffler and Democrat Raphael Warnock. Warnock, a pastor of a Black church in Atlanta, won Georgia’s second seat.

“Whoever would have thought that in the state of Georgia we would see the people of Georgia rise up and send an African American man who grew up in public housing, the pastor of this Ebenezer Baptist Church where Dr. King preached, and a Jewish young man, the son of an immigrant, to the U.S. Senate?” Warnock said, according to CNN.

With these two candidates’ victories, the Senate is split 50-50 between Democrats and Republicans, allowing for potential tie-breaking votes by Vice President-elect Kamala Harris.
Rioters Attack U.S. Capitol, Interrupt Electoral College Certification
At noon on Jan. 6, members of Congress convened to formally certify President-elect Joe Biden’s Electoral College victory. However, insurrectionists, supporters of President Trump, violently occupied the U.S. Capitol building in an attempt to overturn election results, echoing Trump’s false claims of a stolen election. Shortly after 2 p.m., as U.S. Capitol Police were overwhelmed by rioters, lawmakers and staff evacuated the House and Senate chambers. The nearly four hours of clashes in the U.S. Capitol between rioters and law enforcement resulted in five deaths: one officer after being beaten by rioters, the shooting of a rioter by police, and three others from “medical emergencies,” the New York Times reported.

After the building was cleared, Congress resumed the certification process at 8 p.m. In the joint session, a bid by Rep. Paul Gosar, R-Ariz., and Sen. Ted Cruz, R-Texas, to object to the certification of Arizona’s Electoral College votes failed 94-6 in the Senate and 303-121 in the House.

Sen. Josh Hawley, R-Mo., and a group of House Republicans next objected to Pennsylvania’s results. This vote failed 92-7 in the Senate and 282-138 in the House. Ultimately, a number of Republicans who had planned to object to Biden’s victory later reversed course after the Capitol attack.

At around 3:40 a.m., Vice President Mike Pence formally announced Biden’s Electoral College victory on the House floor.
Trump Impeached for “Incitement of Insurrection”
Following the riot at the U.S. Capitol on Jan. 6, President Donald Trump was impeached by the U.S. House on Jan. 13 for “incitement of insurrection.” Two hundred and twenty-two Democrats and ten Republicans voted to impeach Trump, making him the first president in U.S. history to be impeached twice, with the largest number of representatives from a president’s party to vote for impeachment.

On Jan. 19, Sen. Mitch McConnell, R-Ky., said that the insurrectionists who stormed the Capitol were “provoked by the president and other powerful people,” the New York Times reported.

The Senate trial to convict Trump will take place sometime after President-elect Joe Biden’s inauguration on Jan. 20, and the Senate will need a two-thirds majority vote to convict Trump. If convicted, Trump could face numerous consequences, such as being disqualified from running for public office, losing former presidential benefits including a paid pension for life, losing Secret Service protection, and damage to his reputation and that of the Republican party.
Inauguration Day 2021
The inauguration of President-elect Joe Biden as the 46th President of the United States took place on Jan. 20. Biden was sworn in by Chief Justice John Roberts Jr. shortly before noon, following guidelines established by the 20th Amendment.

The inauguration followed in tradition with former presidents, with parades and performances, but due to the COVID-19 pandemic, the small, socially distanced crowd was limited. Also ahead of the inauguration, up to 25,000 members of the National Guard joined D.C. law enforcement to protect against security threats following the Capitol attack.

A virtual parade is planned this year for the increased number of remote viewers, with appearances by actor Tony Goldwyn, former “Daily Show” host John Stewart, and pandemic heroes from across the county. There will be a televised event called “Celebrating America” airing at 8:30 p.m. with performances from Bruce Springsteen, Foo Fighters, John Legend, Jon Bon Jovi, Justin Timberlake, Demi Lovato, Ant Clemons, and Lin-Manuel Miranda.

On Tuesday night, the inauguration committee held a lighting ceremony around the Lincoln Memorial pool in remembrance of people who lost their lives due to the pandemic.

After swearing in, Biden and then Vice President Kamala Harris will follow tradition and pass in review with members of the military. Pass in reviews is a military tradition on Inauguration Day of a peaceful transfer of power to the new commander-in-chief.