The LCPS School Board covered the specifics of Title IX as well as school nutrition and county-wide lunch policies. 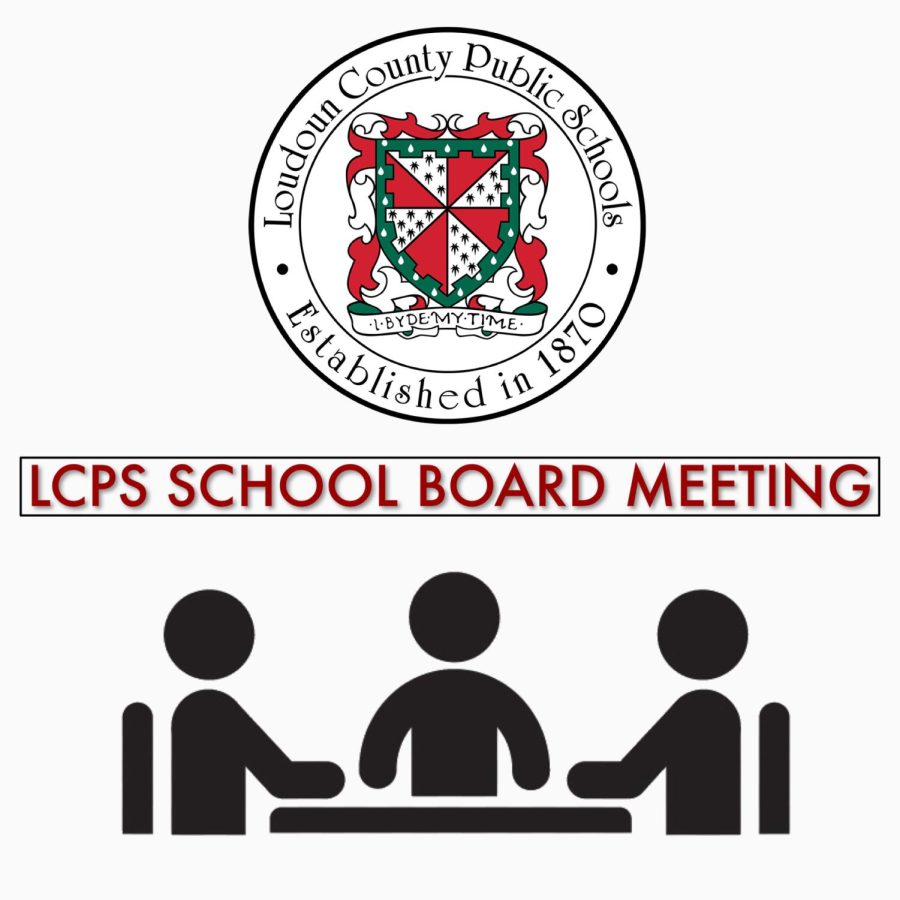 During public comment, Loudoun County parents and students voiced their concerns over the School Board’s recent actions to deal with the sexual assault case.

On Oct. 26, the Loudoun County School Board convened at the LCPS Administration Building for their fourth Tuesday School Board meeting.

The meeting began with an octet of the Rock Ridge Choir singing the national anthem. The Rock Ridge Choir is going to districts, regionals, and nationals this year.  Although junior Sneha Khandavalli felt the tension in the School Board meeting due to the conversations surrounding recent sexual assault allegations, she was excited about the opportunity to sing at the School Board meeting. “It was really fun going with the rest of my choir friends,” Khandavalli said. “It was very very intense ‘cause everyone was so serious.”

During the June 22, 2021 School Board meeting, Policy 8040 was passed for the rights of transgender students. Topics covered by the policy included: Student Identification, Access to Activities and Facilities, development/training, and any other considerations. Parents in public comments included their thoughts about Policy 8040. Although Policy 8040 does not outline how the county handles cases of sexual assault, most thoughts were complaints and concerns about the effects of the policy due to recent sexual assault cases.

“It’s ridiculous and unreasonable on how Loudoun County is approaching the situation,” eighth grader Madeleine Harris said. “More than one in five girls have been assaulted on school grounds…something needs to happen and things need to change.”

“You just had hundreds of students walk out of Loudoun County schools today, because they feel unsafe in schools,” parent Erin Smith said. “You haven’t listened to parents or students for years. And now the students feel as if walking out is their only choice to be heard.”

On Nov. 5, superintendent Scott Ziegler addressed recent debate over sexual assault by sending out an email to the Loudoun County community. In the email,  Ziegler stated that the board believes that “we have followed all mandatory reporting protocols and aided law enforcement to the fullest extent allowed in all investigations regarding these matters.” In addition, Ziegler stated that the School Board had hired investigators on October 28, 2021 for an independent review over the sexual assault cases. Updates will be sent out to the Loudoun County community about progress and future steps.

Blue Ridge Representative Ian Serotkin wanted to add an amendment to the legislative program by adding an item. In the item, Serotkin stated that the “the Loudoun County School Board supports changes to Title IX that strengthen and restore protection against sexual harassment and sex-based discrimination.”

He added that the School Board would support restoration and modification to Title IX that would provide supportive measures and greater protection to K-12 students. To bring the item into a bigger picture, Serotkin asked Ziegler to describe the process of what happens after a student reports an alleged sexual assault that occurs on school grounds from the time it is reported to throughout the process. Ziegler then turned over the question to Title IX coordinator Mark Smith in order for the question to be answered in “greater detail.”

Smith noted that during the Title IX sexual allegation process, there was an intake period spent trying to understand the specific nature of the allegation in order to determine whether Title IX would apply or not.

“Title IX has a very high bar that was changed in 2020,” Smith said. “It was in the effort to indicate that the allegations need to meet the criteria of being severe, pervasive, and objectionably offensive…in terms of the criteria for sexual assault and sexual harassment that have to meet the U.S. code definitions.”

In addition, Smith reaffirmed that if a student were to report an allegation of sexual assault to school administration, they would be required to report the allegation to law enforcement. At that point, law enforcement would take over the investigation. However, the School Board does have some power in these investigations. If a student were to impose a physical threat to a school environment, the School Board would be able to remove said student through an individualized risk assessment.

The School Board also discussed the lunch food quality and variety drop across the county, due to supply chain issues affecting multiple industries. Although this is hitting LCPS hard, not all schools have been entirely affected by this drop; some schools are still selling various cereal snacks and treats that students can buy. However, the snacks that the schools sell aren’t manufactured as per usual. Instead, a more regulated formula is put in effect.

The board also addressed the free lunch policy, where students must take all food that is offered with the tray for LCPS to gain funding. The federal government has established these policies and regulations as a way to push more nutritious options for students.

According to School Board member Andrew Hoyler, parents and students have been noticing a considerable drop in quality due to these policies. Parents also voiced concerns about the amount of perceived control that is now gone. Instead of being able to lock unhealthy snacks and junk foods behind a paywall, students are capable of taking them for free with every meal.

School Board representative Sanjay Jacob voiced his thoughts on the school lunch policies. “As a student at TJ … this concept of free lunch–although it is really beneficial, it causes an influx of students and faculty who want said free lunch,” Jacob said. “What this ends up causing is a lack of time…meaning the people who are unfortunate enough to be at the back don’t have enough time to eat. This is something that I run into on a daily basis, and it should be noted that if the free lunch policy is to be continued, this trend will also continue.”

The next School Board meeting will be on November 9, 2021.