Horror Movie “Choose or Die” Lacks Jump Scares, but Makes Up For It With Exciting Plot

The movie was expected to be similar to “Truth or Dare,” but the film excelled in plot more than horror. 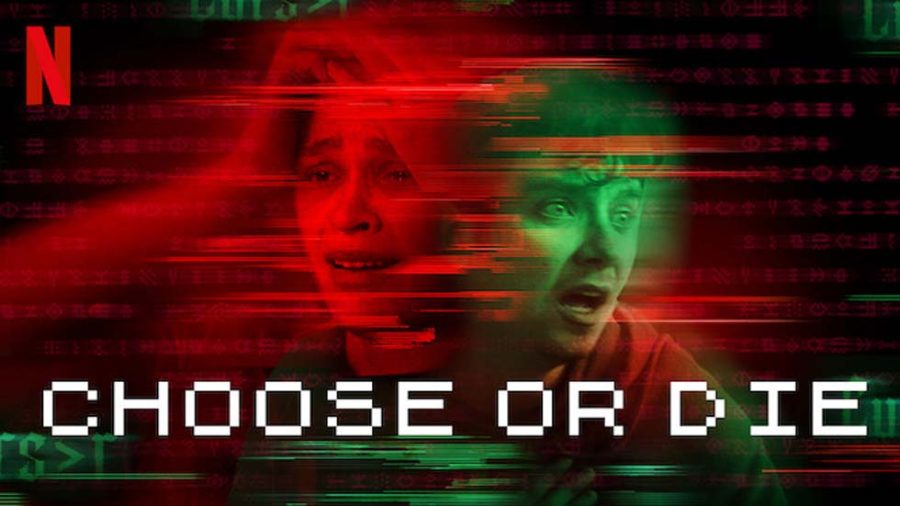 Asa Butterfield and Lola Evans share a stage in the horror and suspense of the film.

The horror movie “Choose or Die,” released on April 15, 2022, caught viewers’ attention with a familiar cast.  Isaac, the main character, is played by Asa Butterfield, who appeared on  “Sex Education,” a popular Netflix original show which attracted several fans to “Choose or Die.”

“Truth or Dare,” another horror film with a similar concept, also led fans to the movie.

“Choose or Die” starts with a collector of old video games named Hal (Eddie Marson) finding a game called “CURS>R.” He expects it to be a regular old game, which it was, until objects around him in real life start moving. Hal soon learns that his decisions in the game hurt him in real life, such as his family being harmed.

A few months later, college student Kayla (Lola Evans) visits her nerdy friend  Isaac (Asa Butterfield), where she discovers the same “CURS>R” game and a phone number offering a $125,000 prize. She calls the number and gets a recorded message telling her to finish the game and insert the number code at the end to get the prize.

Kayla starts playing the game in a cafe. This simple decision to play soon turns to regret as she finds out that it affects real life. It resulted in innocent people dying, especially the people close to her.

Butterfield plays Isaac very well with the way he plays a nerd who also is friends with a more outgoing girl. This also leads me on to saying that Evans plays Kayla well with how mysterious and curious she was. Overall, the directors do a great job picking actors for roles.

This movie did a great job with making an interesting plot, but the horror elements were lacking. Although there were a few deaths, it didn’t leave the same impact as other horror films. Rather, horror in some scenes would have enhanced the movie and made it better. They could have had more jumpscares in the scenes with scary things. Instead, they chose to make a well-done plot instead of focusing on the actual aspect of making a horror movie.

Even with a strong plot, this horror movie did not live up to the hype; therefore, it earns a 6/10.

“Choose or Die” is now streaming on Netflix.